You are here: Home / Book Marketing / How NOT to annoy your Twitter followers

I like to focus on the positive, but sometimes it’s just more useful to come right out and say: Please don’t do THIS.

So here they are, some of the specific Twitter behaviours that are likely to disenchant your followers, get you unfollowed — or even get you blocked or reported for spam. Yikes!

At heart, the underlying reason these don’t work is because they violate one or both of the Two Golden Rules for Twitter:

And if you’ve been doing some (or all) of these, don’t worry, we’ve all made lots of mistakes on Twitter! Today is a good day to start doing things differently. 🙂 Yay team!

There are services that allow you to set up an auto-reply, which sends a DM (direct message) each time someone new follows you. 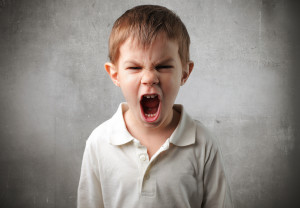 It sounds like such a nice idea, and yet is widely hated. If you don’t believe me, try googling “auto DM hate” and see just how much emotion is out there on the interwebs.

I have lots of great Twitter friends who have one of these in place, and rest assured, if that’s you, I’m not judging you for it! I’ve made so many Twitter mistakes myself over the past couple of years, I choose Tolerance. [Insert old saying here about glass houses and the throwing of stones… 😉 ]

But some people are not so mellow. Some will instantly unfollow you if they get an auto-DM from you. Others will even block or report you, they hate auto-DMs so much. So you need to know!

What’s wrong with it? There seem to be two main complaints:

Back when I was a shining-eyed Twitter newbie, I responded to one of the more cleverly-worded of these auto-DMs, thinking someone was actually speaking to me, only to find out it was just a soulless, unmonitored recorded message (or that creepy morse code signal in Neville Shute’s On The Beach). I felt disillusioned, and silly.

If you’ve got one of these set up on your account, don’t be embarrassed, you’re not the only one. But you might like to go and deactivate it now. 🙂

You’ll get a much better following if you choose carefully who you follow back. Check out this excellent article by Molly Greene about how to build a quality Twitter following fast. 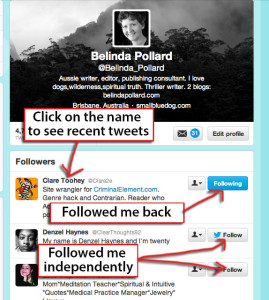 If you’re not sure how to find and follow back your new followers, this is the way I do it.

2. Be VERY selective about robots

Some people will say: Never automate anything on Twitter. I’m a bit more chilled about that. Some automation can be helpful. To me, the key is to work out if it’s helping your followers, or just turning you into a Mega Marketing Spam Bot!

For example, the Hootsuite scheduler can be handy because it allows you to tweet at different times of the day for the convenience of followers in different timezones. I’ve used that at times (when I have a phase of being quite organised about Twitter 😉 ) to tweet links to useful articles I’ve found.

I recently installed a WordPress plug-in on this blog called Tweet Old Post, which allows me to tweet my previous articles that are still useful. I decided that, to begin with, I’d only allow it to tweet once a day, at different times of day, to minimise any annoyance for my followers. It has drawn a lot of new readers into my blog (the benefit from my perspective) and given more of my followers information that they find useful for their writing, publishing and marketing (the benefit from their perspective). I’m still weighing it up, and we’ll see how it goes.

However, these are some automations that seem to be generally despised:

Some services allow you to automatically “favourite” tweets that have certain keywords, which makes you show up in the “interactions” list for that person. Many people will click on the person who has favourited their tweet. Spammers exploit this to get you to click on a malicious or grubby website in their profile. And this article by Mary C. Long shows how it got her Twitter account suspended. Warning, Will Robinson! (That article is well worth reading, by the way, just in case you were thinking of signing up for one of these.)

It’s hard to know what could be positive about this one. It sounds like you’re either skiting about how many new followers you’ve got, or a loser because everyone unfollows you. (Incidentally, a lot of them are unfollowing you because of this auto-tweet.) And either way, it makes you sound like a person who is only on Twitter for the numbers.

Ooh, I felt some double-takes as people read that line. But no, it’s not a good idea to ask someone for a retweet. Dang.

Social media guru Chris Brogan obviously gets so many of these requests that he even posted an article purely about how asking for a RT or mention — unless it’s for a cause — isn’t cool.

Some people will make a general “please RT”, and I doubt that will offend too many, because no one’s under any pressure. It certainly doesn’t offend me, but as we’ve already discussed, I’m pretty mellow. 🙂

But if you target a specific person and ask them for a RT, that’s putting them in an awkward position if they prefer not to do so. Maybe that thing you’re asking to be retweeted is simply not something they tweet about. For example, in the past I’ve been asked to RT someone’s link to their book on Amazon, but I don’t actually tweet books I haven’t read. (I don’t think those tweets tend to have much impact anyway — reviews seem to be more useful.)

It’s so important to let people be the captain of their own Twitter ship. We need to respect the right of others control what they’re tweeting. People will spontaneously RT your tweet if they think their followers will find it useful in some way, and that’s the most wonderful type of RT to get.

The exception: Asking RTs for a good cause. For example, I have retweeted for people who were raising money for a particular charity with urgent need. I’ve also retweeted for people in crisis who were asking people to pray, because I’m a praying person myself and I have some followers who also are praying people, and so I figure they might like to help — the ones who don’t can just skip over that tweet. It will vary from person to person, which causes they do or don’t want to support.

So if you have a cause, ask away, but of course be gracious if people choose not to retweet you. (You were going to be like that anyway, of course, because you are so kind. 🙂 )

Speaking as a person who has had Twitter exchanges about dog pacifiers, Dalek relaxation videos, and eating chocolate chip pancakes in evening dress, this may seem like another “throwing rocks in glass houses” incident. 😉

I do think, though, that it’s OK to be yourself on Twitter, so long as you stay On Topic for MOST of your tweets. (I may be wrong, of course!)

But it’s good to avoid things that are negative or useless or irritating for others to read. Some examples:

One person’s trash is another’s treasure, so the definition of “garbage” is one we each have to make for ourselves. I try to keep in mind that Twitter is public and tweets are there forever. So I try not to tweet anything that I wouldn’t like my mother or my employer or my best friend or my worst enemy to see!

What do you think? Which Twitter behaviours would you prefer people didn’t do? What have you learned about your own behaviour on Twitter, by people’s reactions?