You are here: Home / Book Marketing / How to make the most of a writers festival or conference

When I say “writers festival” or “writers conference”, what do you think of?

Some people love ’em, some don’t know what the fuss is about, some wish they could go and can’t afford the time or money, some people went to one once and it was disappointing.

But the response that bothers me the most is this one: “I’m not really a Proper Writer yet, so I can’t go.”

I’ll give you a hot tip: writers conferences and festivals are packed with hopeful emerging writers. If you are still getting started as a writer, you will NOT be out of place. 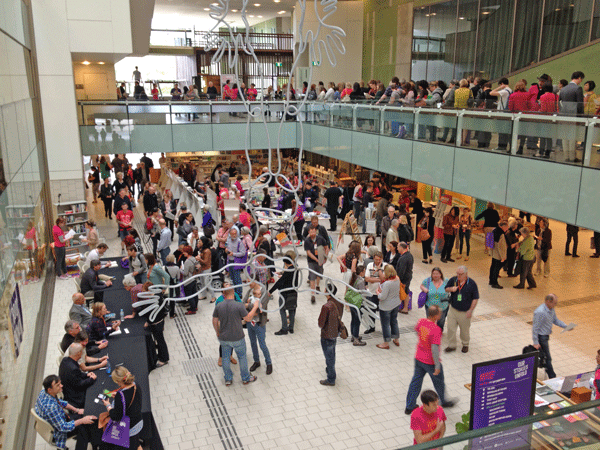 It’s not a “writers conference“, because a lot of readers go too. But there are a whole swag of events that help train, equip and motivate writers, ranging in price from fr*ee to $80 for a 3-hour workshop.

This year, I got more out of the festival than I ever have before. I’ve been thinking about what I did differently, so that I can try to do it again next year!

And I thought some of my experiences might also be helpful for you.

1. I made an investment in myself and planned ahead

Usually I think, “Gee I hope I get to go to some events this year. I hope I’m not too busy to go.” September rolls around (following on from August, as it seems to do every year so far), and my hair is on fire with deadlines, and I either get to only a couple of events, or none at all. And the ones I really wanted are booked out anyway. Dang. 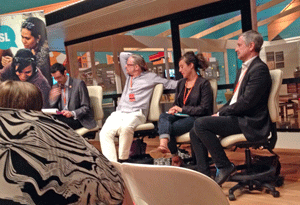 This year I decided: This is important to my career as a writer, and it also helps me get a handle on where publishing is up to, which helps me both as a writer and a publishing consultant. Plus I can use it to come up with some blog posts. I’M GOING TO THE FESTIVAL.

2. I made targeted choices 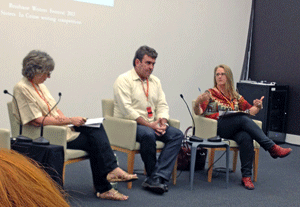 These are the events I booked, and why:

3. I was open to absorbing inspiration from unlikely places

The takehome for you? You’ll likely get some sessions that aren’t exactly what you expected, but that’s OK. Think creatively, and there’ll be ways to use the experience.

An added reason I chose the events I did was because I could see that the presenter could be a good subject for a blog interview – someone my blog readers would like to hear from.

So I gathered up my courage and asked them for interviews at the end of the session. I got a nice collection of email addresses, so that I could do email interviews with them – and it’s always much easier to do that when you’ve previously met someone face to face. 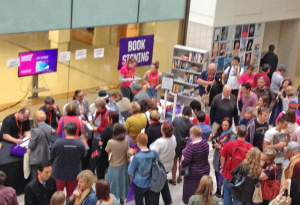 Most presenters are writers, and they’re promoting a current book as well as presenting on a useful topic, so it’s a win/win. They get their book promoted to my blog readership, and my readers get some fantastic insights into a part of the writing or publishing process, from someone who’s been there, and done it well enough to be asked to present at a major festival.

I also connected with people who could help me with my projects.

I heard a fellow participant in a 3-hour workshop say he’d been a police detective. My antennae went up. For several of my upcoming novels, I’ll need some help with the police procedures. When I saw him later that day, I told him my plans and asked if he’d be willing to help me. He said yes! And we’ll be able to exchange skills and help each other with our writing projects.

AND I got this one… I’m still so excited about it I’m jumping around in my chair weeks later.

That history professor who wrote the book on the Great Barrier Reef?  After his session, I bought his book, and followed him down to the book signing table. (No stalking; only following. 😉 )

My problem I needed to solve was this: my novel set on the reef has a major plot flaw that’s been blocking me. I needed a solid, plausible motivation for the mayhem that’s about to unfold for my hapless characters.

So I placed my copy of his book in front of him to sign, and then… screwed up my courage and said, “This will probably sound odd, but I’m writing a novel set on the reef, and I’m having a problem. I’ve been doing a lot of research but I can’t decide what’s on the reef that’s worth killing for.”

He said — wait for it — “Ooh, I’d been hoping I’d get one of these!” I can’t stop smiling, even thinking of it weeks later! He wasn’t just an academic, he was a writer too. How easily we forget that…

And then he said ONE WORD. And it was the answer. Synapses fired, I saw connections and possibilities. And all my plot roadblocks came tumbling down. I think I may actually have done a happy dance, right there in the signing line.

But suffice to say, it solves my plot problem, and the professor even gave me the name of a researcher I can contact about it, and his own email address in case I have any more questions.

Oh, how I love writers festivals. 🙂

So, what’s your take on writers conferences and festivals? Have you been to one? Are you going? Have you learnt some things that you can share with us, about how to make the most of the opportunities?