You are here: Home / Writing & Editing / Live dangerously. Use an adverb.

Do you ever feel intimidated by writing advice, and pushed in a direction you don’t really want to go? Time to rebel.

The subject of today’s literary disobedience is the Adverb. I’d like to reclaim this despised part of speech, on behalf of sane writers everywhere. 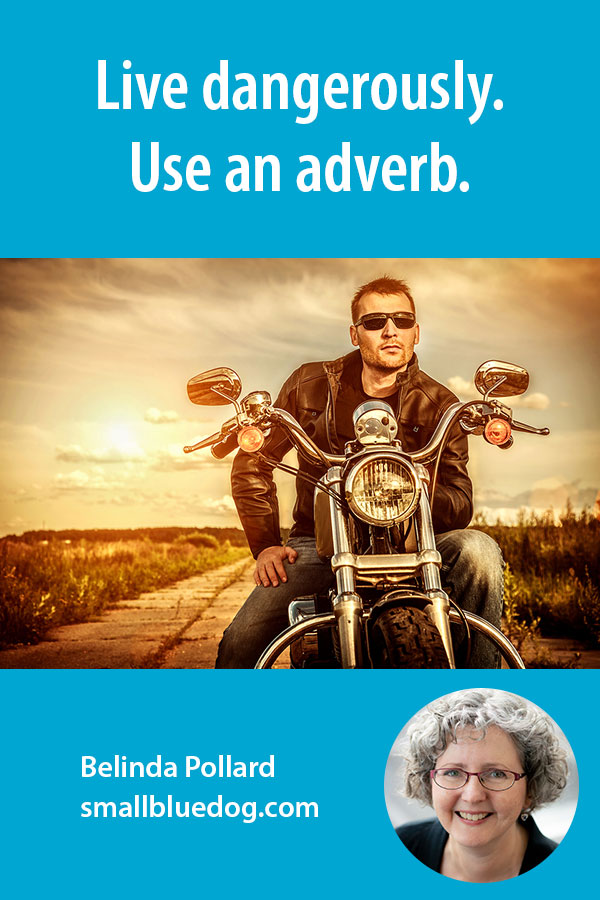 The internet is awash with Adverb Hate. And the worst part of it is the way it confuses some writers, who end up thinking they are never allowed to use an adverb anywhere ever again.

It even affected me. As an editor, I’m comfortable with my own opinions. But as a writer, especially with my first novel, I found myself descending into dithering paranoia all too often…

One day I noticed that I was hunting for ways to express an adverb as a phrase, simply so I could avoid the telltale -ly appearing anywhere on my pages, and drawing unwanted attention from the Adverb Police!

And that’s the day I knew it had to stop.

So, is there ever a time that an adverb is a GOOD thing??

What is an adverb?

My computer dictionary defines “adverb” as “a word or phrase that modifies the meaning of an adjective, verb or other adverb, expressing manner, time, place or degree.”

I find the easiest way to remember it is to think of something you add to a verb to describe it. Obviously, that doesn’t cover all the uses. But it’s a good place to start.

He’s hardly the only one to say negative things about adverbs, but horror writer Stephen King’s quote is the one that is most often repeated.

“I believe the road to hell is paved with adverbs, and I will shout it from the roof tops.” ~ Stephen King, On Writing: A Memoir of the Craft

For more on what he actually said, check out this article at Brain Pickings that places it in context, The Adverb Is Not Your Friend: Stephen King on Simplicity of Style. There are definitely some good tips there.

But do we have to throw out the adverb with the bathwater?

Thoughts from around the web

Quick and Dirty Tips has an article called How to Eliminate Adverbs.  The title probably shows that writer’s viewpoint. 😉

Janice Hardy, writing on KM Weiland’s blog, advises us to see adverbs as “helpful red flags during revisions, pointing out great opportunities to flesh out what our character is doing and identify places we might want to develop further.” She seems to allow that there might be a case where an adverb can remain, but it’s an isolated case.

I like this little Ted-Ed video by Nadia Kalman on how to write dialogue. She suggests we ask ourselves the question: Do I really need that adverb? but also provides examples of where an adverb can be handy to describe dialogue when the words don’t match the actions.

Lily Rothman writes a light-hearted but provocative article in The Atlantic entitled Why I Am Proudly, Strongly, and Happily in Favor of Adverbs.

“Without ‘merrily,’ we would row, row, row a boat down a stream and think it a nightmare,” she says. “Adverbs don’t just make a sentence memorable, they change its meaning. Sure, there are many times when a more precise verb can narrow the gap in understanding—but some verbs can’t be fine-tuned any further. A sigh is just a sigh, but anyone who has ever been in love knows how important it is to distinguish between when she sighs happily and when she sighs otherwise.”

In a guest post on the aptly-titled Writers’ Digest blog, There Are No Rules (hear, hear), Jim Adam writes in defence of the much-maligned adverb. He says, “Sure, adverbs can be overused. But if one extreme is bad, the opposite extreme is just as bad. Balance in all things. Extremism comes in many forms, and it flows just as easily from a word processor as from an Uzi submachine gun.” Ooh, them’s fighting words.

Novelist Anne R. Allen treads a much calmer path, but in an excellent blog post about Why You Should Ignore Most of the Advice from your Critique Group…but They Can Help You Anyway warns us about “Enforcers”. “These people never met a writing rule they didn’t love. They want to enforce each one with a ‘zero tolerance’ policy … They tell you the word ‘was’ is taboo … They insist on no prologues, EVER. They tell you a book can’t (or must) be written in the first person or present tense. They have a search-and-destroy policy concerning adverbs.”

So, do bestselling novelists use adverbs?

One day, feeling cranky about yet another blog post I’d read that declared in a very superior tone that adverbs had gone the way of the dinosaurs, I picked up Place of Hiding by crime queen Elizabeth George, which happened to be on the table. I opened it at random and counted 4 adverbs on one page.

This pleasing result gave me the enthusiasm to grab a bunch of other books off my shelf, and open them at random. Here’s what I found.

Since I opened each book at random, maybe I found the only adverbs in each whole book, and there are none anywhere else.

But I doubt it.

It’s definitely true that I was a biased researcher looking for results that confirmed what I wanted to believe. Nevertheless, the writers who wrote these books, and the publishers who edited them, and the readers who bought and read them by the truckload, all must have missed the No Adverbs memo.

Successful and relaxed writers seem to use adverbs wherever they help the process of telling the story, without descending into existential angst over it.

And if you say to me, “Well you’re not in the league of PD James et al,” I’ll say, “Yes, and I never WILL be if I allow a bunch of arbitrary rules to suck all the heart and soul out of my writer’s voice, and end up overworking sentences in an attempt to get rid of every -ly ending on the page.”

It’s my considered opinion that the “eliminate all adverbs absolutely everywhere” rule should be resisted.

I’m even cheeky enough to create a meme about it. But all mischief aside, let’s look past the fanaticism and ask ourselves: Why did someone make up this rule in the first place? There must have been a problem they were trying to solve, albeit by using a hammer to squash a gnat.

Surely the answer is that we’re prone to using too many adverbs. We cram them in there hoping to enhance and enrich the meaning, and end up obscuring and weakening it instead. There’s no doubt that having an adverb (or two or three) in every sentence gets clumsy and amateurish.

And so the Rule alerts us to something NOT to despise and annihilate, but something to watch for.

What do you think? Are you an adverb hater? A closet adverb admirer? Simply confused?