You are here: Home / Writing & Editing / Write the introduction last

Whether you are writing a book, an essay, an important email or a resume, you’ll get the best results if you write the introduction last.

That might sound like an upside-down way to do things, but it will make your writing faster and more effective. Here’s why. 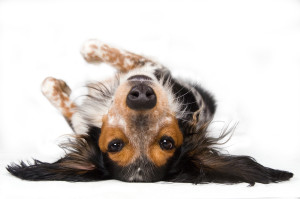 It might sound upside-down, but writing the introduction last saves you time and effort
(Image via Bigstock/Shevvers)

The problem with Introductions

So many people seem to think of the introduction as little more than a written handshake. But it’s much more than that. A properly written introduction does some heavy lifting.

When I was writing essays and academic papers waaay back at university, I discovered that an introduction had to provide a kind of roadmap for what was to come in the rest of the paper.

And being a naturally spontaneous teenager (translation: left all my assignments to the last minute!) I was forced to find ways to make the most of every minute left before the deadline, as the clock ticked relentlessly on…

I discovered that the fastest and most effective way to write an introduction was to wait until the entire paper was assembled. (That way I could get to bed at 3am, instead of 4 or 5am. 😉 )

Later, I discovered that this principle works for almost anything that needs an introduction. An introduction is fitter and stronger if it’s written last.

So, you’d think that all this experience would have been very useful in recent years, when I started writing my first novel, wouldn’t you?

And still, like the innocent little newbie novelist that I am, I kept on polishing and recutting those luminous jewels that opened my novel, as the novel grew in length. I mean, everything I read said that the opening to a novel is crucial, right? So I had to keep on working and working on it, right?

By the time the whole novel was down on paper, it became clear that the opening I’d endlessly reworked and rebuilt and patched together — my Frankenchapter — was pretty much worthless. The vast majority of that purple prose had to go in the bin. (Or, more accurately, into the Deleted Scenes folder in Scrivener. Makes it much easier to discard things when I know they’re still there somewhere!)

If I’d stopped fiddling endlessly with that opening chapter I would have:

When to write introductions for different forms of writing

If you don’t grab them with your beginning, you don’t get a chance to grab them later. Even the opening line has to sizzle, not just the chapter.

The introduction to a non-fiction book needs to entice the reader further by outlining which of their problems will be solved if they continue reading.

You might think your memoir needs to begin: I was born in [this place] on [this date]. Um, please don’t do that. (Unless of course you were born in some extraordinary place at a crucial moment in history, and it has shaped your whole life. There’s always an exception!)

I’ve already mentioned that the introduction for academic writing performs a specific task. You’ve probably been given some guidelines for exactly how that must be done, which varies between educational institutions. This is a workflow that I found useful:

The introduction to most forms of business writing has to convince a busy person why they should bother reading any further, when the phone is ringing and there are 3,497 emails in their Inbox.

And, in case they DON’T read any further, it needs to give them a potted summary of what you wish to communicate.

What do you think? Do you write your introductions first or last? Do you agree or disagree with me? What have you learned from your own experience of writing introductions? Let’s talk, in the comments below. 🙂