You are here: Home / Book Marketing / 3 reasons for using a pen name

Should you write under your own name, or a pen name?

Pen names, pseudonyms and nom de plumes have been around for a long time. George Eliot was really Mary Ann Evans. How many of us have heard of Eric Blair? — but George Orwell might be more familiar. And more recently, even Nora Roberts and Stephen King have published some books under different names.

There are lots of reasons for using a pen name, but in today’s world it seems to boil down to three main categories: 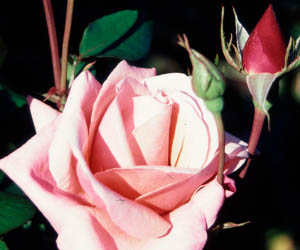 A rose by any other name might smell as sweet, but will it sell as many books?

Thanks to Cassandra Gaisford for suggesting this topic. It’s complex, but fascinating!

Let’s go through those three reasons.

Some authors have used a false name for life-or-death reasons, because they live under oppressive regimes, or have dangerous things to say about powerful people.

For some, it’s been a matter of privacy. They don’t want weirdos looking them up in the phone book, or workmates teasing them.

Some might work for a government department or other organisation which does not allow its employees to publish under their own names, because of the conflict of interests it may cause.

Or perhaps they are a schoolteacher writing on adult themes, and they don’t want any clash between these two areas of their lives.

Things to think about:

Reason 2: To separate the author’s books into different types

I’ve thought about doing this myself. I’ve been writing biblical meditations for years, and now I’m writing a humorous dog memoir and a wilderness thriller. What a clash of concepts! 😉 In some ways it seems sensible to separate these different writing types into different author names, and I thought seriously about it some years ago.

But so far, I haven’t done it. Why not? It’s so much work maintaining one author profile, that I don’t want to do it for two or three! And it’s less complicated for me just to be myself.

Things to think about:

Reason 3. To overcome the limitations of the author’s real name

Some people just don’t like their real name. Or their publisher doesn’t!

Some names are hard to spell — a real disadvantage in our age of online bookselling. So the author shortens it, simplifies the spelling, or chooses something completely different.

Patricia O’Brien’s fifth novel was considered a flop, which made publishers too cautious to buy the sixth one, The Dressmaker. Her agent shopped it under the pseudonym Kate Alcott, found a publisher in three days, and it became a bestseller. She used a pen name to escape the negative associations caused by her unpopular novel. “My book wasn’t getting a fair chance,” she said. “And choosing a pen name gave it a fair chance.”

And some writers — usually women, but not always — decide not to flag their gender. JK (Jo) Rowling famously used her own and her grandmother’s initials, because her publisher thought that boys might not want to read a book written by a woman. Whether PD James chose her pen name to be discreet about her gender or not, it has certainly worked that way, so that many people assume the grand dame of British crime is male. She used her maiden name and initials. Would Phyllis White have been such a successful crime writer? We’ll never know!

Self-publishing guru Joanna Penn chose to use her initials to publish her thrillers as JF Penn, to avoid gender stereotyping, and caused some animated discussion on her blog when she announced the move. “I don’t want any consideration of my gender to come up when someone reads my books,” she said. “I want them to have a great fun read and escape the world for a time. So if changing my name to initials stops any second thoughts, then it’s worth it.”

Sometimes the gender thing works in reverse, too. The creepy novel Before I Go To Sleep is about a woman’s battle to know who to trust when she wakes up every day unable to remember the last 20 years. The author, SJ Watson, turned out to be a man, and it was a clever move by his publisher to use his initials rather than full name, especially since the book is written in the first person.

NEXT WEEK: How to choose a pen name (sign up for my email list below, so you’ll know when it lands)

So, what about you? Are you thinking of creating a pen name? What are your reasons (if you can tell us!)? Or have you already done it, and how well did it work? I love to hear what you think, and what you’ve experienced.