You are here: Home / News / Could this be the way to fund your book? 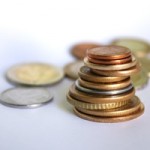 The Guardian newspaper in the UK had a story this week about a man who raised $1 million to fund production of his book through Kickstarter, a “crowdfunding website”. Others have financed publishing ventures through similar means. Could it work for you?

Maybe. Let’s have a look at what happened.

What Rich Burlew did

I recommend you read the full story at the Guardian, but the gist of it is this: 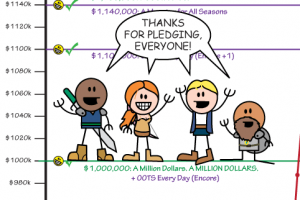 The concept of Kickstarter is that fans of a project donate to make it happen, a bit like “angels” who invest in business projects, but with much smaller amounts of money. If your project doesn’t reach its target by the closing date, no money changes hands. This protects both sides — you don’t have to follow through on a project that doesn’t have sufficient funding.

Donors receive various incentives — in Burlew’s case they were offered things like a fridge magnet and digital comic for $10, up to the top of the range at $5000 for their character to receive a cameo in a future Order of the Stick comic.

Could you do it too?

Yes. You could potentially fund a publishing project on Kickstarter or another crowdfunding site. Pozible is an Australian site, and there are others — just google ” crowdfunding “.

Should you expect to make a million? No. It’s always a possibility, but you probably won’t. In fact, you almost certainly won’t. Burlew’s situation is newsworthy because it is NOT typical. Comprehensively not typical. Utterly unusual. Have I made myself clear? 😉

But it is possible to raise more modest amounts of money, and there are things to learn from this man’s experience, because it shows what kinds of things can work in raising funding for your own publishing project.

1. You need a support base

Burlew had a lot of fans who love his work and really wanted this thing to happen. He had been online since 2003, building a community around his work.

Even for more modest results, you can’t just stick a project onto Kickstarter out of thin air, and expect people to start signing away the family fortune. They’re unlikely even to find it among the many projects on Kickstarter — you’ll have to lead people to it yourself, via a website or email or social media or some other means.

You need to build a community of supporters — either online or in the real world. Some of the ways to build it are social media such as blogging or Twitter, or perhaps a speaking program, depending on what kind of books you write.

If you have friends who already have a strong community around them, you could ask them to champion your cause among their own supporters.

Whatever you offer needs to match the type of people who will be interested in your eventual book. Some novelists have offered for donors to have a character named after them. Other writers have offered autographed versions of the book. Some offer posters and other accessories.

Go to Kickstarter.com, type ” publishing ” (without the quotation marks) in the little search window in the centre top of screen, and see what projects come up. Seeing what other people are offering, and how well each project is doing, will help give you ideas.

Make sure that whatever you offer donors is something you are willing to supply. Burlew now has to make and ship 2256 fridge magnets! Choose wisely.

3. Have integrity at all times

Whatever you offer people, you must fulfil it. Don’t launch a project unless you are very serious about following through. Make sure you check what you are signing up for, and are sure of all the terms and conditions of whichever crowdfunding site you choose, before committing yourself.

What do you think? Will you give crowdfunding a try for your publishing project? Have you already done so? Do you know someone who has done it? We’d love to hear from you — add a comment below.