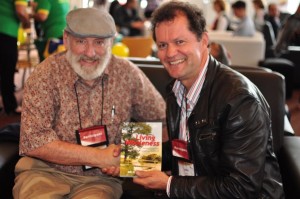 Dr John Warlow (R) presenting his book to Prof Al Dueck (Fuller seminary, Pasadena, California) at a conference in Cape Town, South Africa. John Warlow says: “What Belinda did, apart from being available, helpful, advising yet not taking over… was to take a piece of clay, already shaped by 2 other editors, and make it into a sculpture which was what I wanted it to look like, but did not have the skills to design myself. She combined a number of roles in one, from being the editor right through to it being marketed, making the whole process so much easier for me. It is not hard to recommend her!”

Summary of the strategy:

Dr John Warlow is a psychiatrist and author based in Brisbane, Australia. His specialty is combining a variety of psychological schools of thought with a Christian worldview. He has an acknowledged leadership and mentoring role in his industry, and is in-demand as a speaker at conferences in Australia and various other parts of the world.

When John brought the manuscript to Small Blue Dog Publishing, it had already been edited, but he needed typesetting, design, and help navigating the publishing process.

John was an ideal candidate for self publishing:

Small Blue Dog Publishing set the goal of getting as wide a distribution as possible for John, while avoiding the ‘boxes of books in the garage’ syndrome. We worked with him to develop a multi-faceted approach that included both hard copies and ebooks:

Because John wanted both Australian and international distribution, we chose A5 as the paper size, which translates relatively easily to 6”x9”, an economical US print size. We developed a page design in consultation with John, and typeset the book to 280 pages.

John’s book originally developed as a teaching seminar, and he had drawn more than 90 diagrams in Microsoft Powerpoint, which he used in his teaching and wanted included in the book. They were striking and effective images. However, they presented some logistical difficulties, because Powerpoint is fantastic for projecting images on a wall, but not so friendly to the book printing process. Redrawing every diagram in Illustrator or InDesign would have added a lot of extra expense for John (up to $1500), so we worked to find a solution that would enable them to be used as is.

John was also keen to use on the front cover of the book a photograph taken by his son, and we worked with him to make this possible.

John’s previous books had been published under someone else’s imprint, so we established his own publishing imprint, Living Wholeness, and registered him as a publisher via Thorpe-Bowker Australia. His account has been set up in such a way that he can administer it himself going forward. We also obtained for him a block of 10 ISBNs (International Standard Book Numbers) and a barcode. John needed a separate ISBN for his print version and his ebook version, and two ISBNs were the same price as 10. So he now owns 8 further ISBNs should he decide to publish more books under the Living Wholeness imprint.

We found a local digital press in Australia which could produce a short print run for John at a reasonable price. The quality of digital printing has improved enormously, and often only a publishing expert can tell the difference between digitally and offset printed books. The price difference can be significant – for example $10 each for 500 copies offset, compared to $6 each for 500 copies digital – that’s a saving of $2000 on the print run. John elected to have 500 copies in stock, although he could have gone as low as 50 copies.

We also produced an ebook version of Living Wholeness which John could sell as a download from his website. Because of the high number of diagrams in John’s book, pdf was the most effective and economical option. Other file formats such as epub, which works on various e-readers such as the Nook, do not easily handle highly formatted text. It can be done, but would have been too expensive for John’s needs, and not justified by the needs of his readership. So we opted for pdf which any purchaser can read on their computer, or on an iPad.

For international orders, we set up an account for John on CreateSpace, the print-on-demand arm of Amazon.com designed specifically for self publishers. The account was set up in such a way that John can manage it for himself into the future. We also set up the profile of his book on the Amazon website. When someone orders Living Wholeness from Amazon, the payment is processed, the book is printed, packaged and shipped to the customer, all without John ever having to touch it. He receives monthly payments from Amazon of his portion of the purchase price.

John Warlow says: “What Belinda did, apart from being available, helpful, advising yet not taking over… was to take a piece of clay, already shaped by 2 other editors, and make it into a sculpture which was what I wanted it to look like, but did not have the skills to design myself. She combined a number of roles in one, from being the editor right through to it being marketed, making the whole process so much easier for me. It is not hard to recommend her!”

See John’s book at his website, or on Amazon.