Twitter can be a confusing place for writers, and the internet is awash with conflicting opinions on how you should use it.

Let’s cut through some of that noise, and get to the simple underlying principles.

Being a good Twitter citizen (Twitizen?) boils down to two golden rules.

I’ve written before about the value of Twitter for writers and how to get started on Twitter in just an hour per week. But it’s also important to remember that using Twitter poorly can do more harm than good.

These two “rules” will help you make the most of your Twitter presence, and avoid the pitfalls, without getting yourself tied in knots!

First, let’s see what they’re based upon… 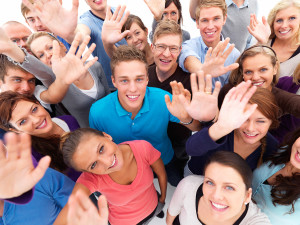 Twitter for Writers: Make friends, not sales
(Image via Bigstock)

If you answered YES to any or all of the above, then you will probably be using Twitter to connect with your fans.

For the rest of us, especially those who are emerging authors, or hopefuls who are simply trying to build a “platform” for their work, Twitter is NOT about having fans.

I’ll say that again, because it goes against the usual assumptions, and it’s so important.

For most writers, Twitter is NOT about having fans.

I meet a lot of people who don’t understand how you can make meaningful connections in 140 characters. I sympathise with their confusion, because I didn’t understand it either until I did it!

This is how it works (let’s call it the “stages of Twitter intimacy”… it makes it sound like a psychology paper!)

Some Twitter friendships are “functional” — you appreciate each other for the skills you can offer each other.

Others become good old-fashioned friendships, because you stumble across people whose company you enjoy. Think of it as the modern equivalent to the penfriend of the past.

You don’t go through all the stages with everyone, obviously. I’m currently connected to 5000+ people on Twitter. I don’t Skype with them all. 😉 But sometimes you just hit it off with a person, who may be in your own city or at the far reaches of the galaxy, and the next thing you know, you are helping one another on your path to writing and publishing.

These are the golden rules for making these connections work.

It’s not an infomercial, it’s a relationship.

There are lots of lists about what to tweet and what not to tweet, and I’ll cover a few below. But the simplest way to navigate all these options is to run it through the Friendship Filter. Ask yourself:

Would I say this to a friend?

Would you go up to a friend, thrust your book in their face and shout: “My book is the best book in the history of the world. Buy it NOW!” ???

Probably not, unless you have a different relationship with your friends than I do with mine. 😉 This doesn’t mean you can’t ever talk about your book, but only do it occasionally, and keep it friendly. This is a great example of book promotion that’s been run through the Friendship Filter:

YIKES! Food of Ghosts is now ranked 8th in ALL Kindle crime books in the US! WOW! A huge thanks to all! amzn.to/ZZsohS

When I saw that tweet, I was excited for Marianne, replied with my congratulations, and was only too happy to retweet it to all my followers. She made it easy for me.

Make it easy for your Twitter followers to support you.

Would I do this to a friend?

If you go to a party…

If you do, you are probably regarded as, at best, charmingly eccentric, or more likely, Absolutely Nuts.

I know some people recommend auto-Direct Messaging new followers, and auto-tweeting your follower/unfollower numbers, but they are some of the most complained-about behaviours on Twitter. Some people will even instantly unfollow you for doing this. (I won’t, I’m pretty mellow about Twitter mistakes. I’ve made plenty myself in my time. 😉 )

Some Twitter services advertise that they can get you 5000 followers fast. Don’t buy it. That is a garbage following that will get you nowhere. You’re much better off to have 50 followers who are really interested in interacting with you.

And badgering people to retweet you, or insisting that they must promote your book, just because you have tweeted something of theirs, tends to drive people away. Some people will unfollow you for this. (Again, I won’t, I’m mellow about mistakes.) Respect the right of others to control their own tweet stream and set their own standards.

Golden Rule 2: Be the kind of friend you’d like to have

The best way to build quality connections is to reach out to others in friendship. Look for ways to be the kind of Twitter friend you’d like to have.

Don’t worry if it takes you a few months to get some momentum going on Twitter. That’s OK. Good friendships take longer to form, but they last longer too.

Don’t worry if you make some mistakes along the way. That’s OK too. Most of us will forgive you and give you another chance. That’s what friends are for. 🙂

What have you learned about making friends on Twitter? Share your experiences. Warn us about pitfalls. And tell us, what worked for you?